Magic Mike may not be the deepest movie in the world- it’s basically a smorgasbord of hot shirtless muscular men grinding in thongs- but it does raise some questions about male and female sexuality and the depiction of sex work, namely stripping, on film.

With Magic Mike, released in 2012 to great box office success (mostly gal pals having a fun night out!) and the phenomenon of Fifty Shades of Grey, (With the upcoming film, sure to shatter records) women’s sexual fantasies or desires are being acknowledged in pop culture and normalized. “Women have begun acting like dudes!” many media outlets proclaim. Well, no. Women have just as much sexual desires as men do.

Directed by Steven Soderbergh, Magic Mike is loosely based off of star Channing Tatum’s own experiences as an exotic dancer before hitting it big in Hollywood. Mike is an exotic dancer who has bigger dreams of being a furniture designer. He meets a young guy, nicknamed The Kid, who he takes on as a protege.

Let’s take a look at the differences between films about female strippers, vs. Magic Mike.

Female strippers in film, such as Demi Moore in Striptease or Marisa Tomei in The Wrestler, are often drug addicts or forced into the life to make money for their children, They’re damaged girls, not the kind you would “take home to mom”. They’re only desirable at the club. Mike makes these choices just for himself, he has chosen this life. Mike is not necessarily chastised for his occupation (though he does keep in quiet when he goes to the bank to enquire about a loan.) Whereas women, such as Demi Moore’s character in Striptease, is seen as an incompetent parent and has no custody of her daughter. 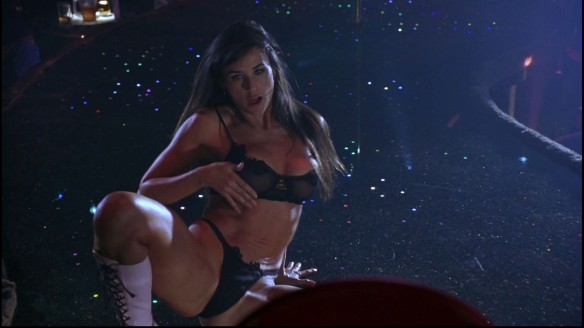 In Magic Mike, the owner of the strip club is a man, Dallas. (Brilliantly played by Matthew McConaughey, almost a tounge-in-cheek poke at himself, he plays the bongos.) The men are all in this together, whereas the female strip club owners are almost always a man. There’s never a whole group of women running the show.

For the strippers in Magic Mike, giving women what they want is a way to prove that they’re real men with impressive sexual skills, unlike the women’s boyfriends or husbands at home. In film, I think it’s rare for a female stripper to be happy about her profession. (Though I believe Nomi in Showgirls wants that life and celebrates her skills, but that movie is really far too ridiculous to consider analyzing.) In film, female exotic dancers are always subject to harassment and assault. This cheapens their sexuality, does not highlight a talent. In Magic Mike, these dances are highly celebrated and happily received by the women. When the women touch the men, it’s never a violation, but consensual and affirming for both parties.

A lot of criticism that followed Magic Mike was, that for a film that catered so much visually towards women, the story leaves much to be desired for them. Critics hang-ups are mostly centered around Mike and Brooke, The Kid’s sister. Many felt that her character just wants to reform the bad boy, a narrative we have seen countless times for female characters. Mike retires his G-string in the end, by the grace of a good girl’s love. He is ready to be more than eye candy, and she helped him realize that.

I didn’t necessarily see it that way. Brooke didn’t approve of his lifestyle per se, but I never got the impression it was out of any moral qualms. It was more because of the drug use, not the stripping. I appreciated that their relationship started out as friendship, fueled by lots of witty banter and actual conversation. I felt her dialogue was fairly realistic. We did get a bit of a glimpse into her character.Brooke cared about her brother, and we saw that frequently. 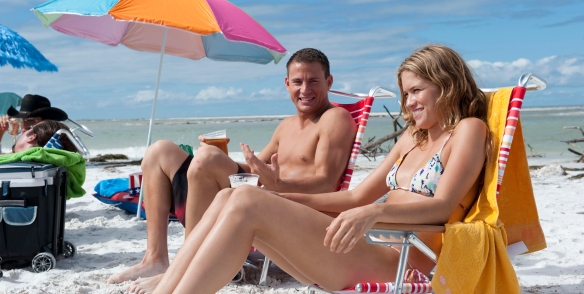 She was not always just a pedestal for Mike to move forward. Mike had his furniture dreams long before he met her, and was probably going to move forward anyway.

But in the end, the film flips the script by having Mike want more from her character, she just wants sex.

Another plus includes male relationships that aren’t just a “bromance”. These are straight guys who are comfortable sharing physical and emotional relationships. This is especially shown in a scene where Matthew McConaughey teaches The Kid to thrust his hips. You don’t often see guys represented being that comfortable with each others bodies and sexualities.

Magic Mike also raised the questions of holding double standards for men. We see endless sexist depictions of women’s bodies in advertising, film, beauty magazines, etc. This perfect ideal of a woman’s body that is impossible to live up to. But here we also have this in Magic Mike. Guys with the perfect bodies and abs. These images for men can be just as detrimental as for women. Women are used to this objectification, when it finally happens for men of course it riles them.

I think this may come down to whether or not objectification is always bad. We all have our fantasies and this, the film Magic Mike or strip clubs themselves, are fulfillments of that. Is that bad? If there was a Magic Mike female version, what would we be saying? It may also come down to whether or not you feel stripping is feminist or not. Can what is right for one sex be wrong for another? 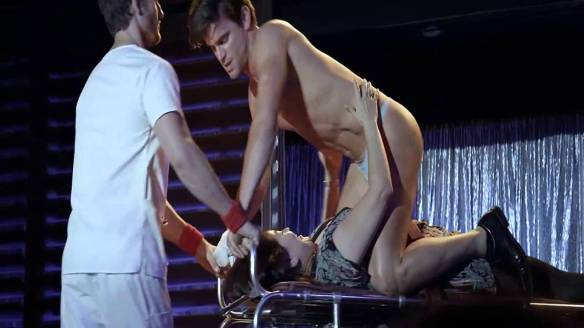 I don’t think there’s any clear answer. But Magic Mike certainly raises a lot of questions about objectification and sexuality, male and female.