Robert Duvall’s film debut was the 1962 film adaptation of Harper Lee’s famous book To Kill a Mockingbird. His role was the elusive Boo Radley- a character who remains a mystery for most of the story. Scout, Jem and Dill swap tales about their neighbor, the Radley son who is a monster-like man that never leaves the house and was once chained up in the court’s basement. They’ve never seen him, so the children regard him as a mythical creature that they can trade exaggerated fearsome stories about. Radley’s reveal is a tense build up, he ends up saving Jem and Scout by killing their attacker Bob Ewell in the story’s climax.

Duvall’s performance is a fantastic example of using silence and the power of the eyes in film acting to convey so much. Boo is described as a silent recluse that only leaves the house at night because the sun hurts his eyes. His condition is never implicitly stated and many debate that he suffers from Albinism, an extreme social disorder, depression, or is mentally challenged. Duvall portrays the physical ramifications of being shut-in day after day, he stayed out of the sun for six weeks before filming. His ethereal performance conveys mental problems that transcend any one definition.

The scene of Boo’s reveal takes place when Atticus and Heck question Scout as to what happened with her, Jem and Mr. Ewell. Scout is not sure who saved her and Jem. “Well, who was it?” Heck asks. Cut to Scout pondering, then noticing something off-screen. “Why, there he is Mr. Tate.” We cut to a wider shot of Atticus and Heck facing Scout, her back to the camera. A man is standing shrouded in the half open door’s shadow. In the book, Boo is described as hiding in plain sight. Indeed, it would have been hard not to notice him. (Though I will say the quick cut to him behind the door scared me the first time, not sure that’s the response the director was going for…) “He’ll tell you his name.” Scout continues.

Heck opens the door wider, and immediately Boo shoves himself even further into the corner. The door, which acted as the anchorite’s protective shield, allowing him to go contentedly unnoticed, is gone.  A close-up of Scout shows her pondering the mysterious man’s identity. The camera cuts to Boo, gliding closer to him as if we are Scout trying to get a closer look and a grasp on who he is. We see him from a lower angle, again from Scout’s POV looking up at the enigmatic figure. Cut to Scout again, as she slowly smiles in realization. “Hey, Boo”. She says, finally piecing together who the silent hero is. Duvall’s controlled facial expressions as Boo maintain a gentle, loving but almost uncertain look in his eyes, which barely flutter as he blinks.

Another exchange of cuts between the two characters, uniting their newfound connection and mutual understanding. For Scout, she is starting to see Boo as a human instead of a feared figment of the imagination. Boo realizes that he has nothing to fear, Scout is regarding him with kindness and offering her friendship. 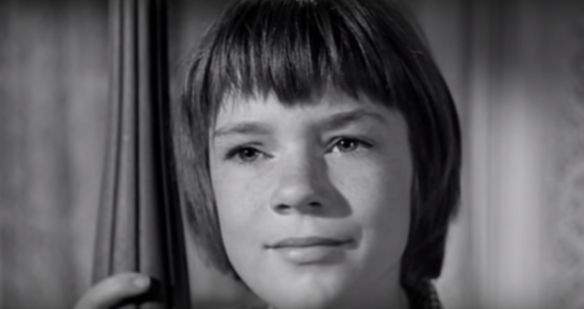 As Atticus and Heck leave the room, Scout walks towards Boo, whose face is still covered in shadow. “Would you like to say good night to Jem, Mr. Arthur?” she asks, offering her hand.  Boo takes it, stepping out of the shadows and into the light, into society and the company of others that his desolate lifestyle denies him.  Scout leads him towards the bed and then, after getting permission from Scout, Boo gently brushes Jem’s head.

In the film’s ending final scene, Scout leads Boo by the hand back to his dilapidated, boarded-up home. We hear the older Scout in voice over reflect, “One time Atticus said you never really knew a man until you stood in his shoes and walked around in them. Just standing on the Radley porch was enough.” Meeting Boo allowed Scout to put a face to the character in the stories. The tales about Boo used to be a scintillating and exhilarating joke, a way to play tricks and dare friends. But seeing the man in the flesh shifted Scout’s perspective of Boo, transforming him from an evil and fabled spirit to a human being that should be cared for and empathized. You can see actress Mary Badham making these connections and her understanding of Boo growing throughout the scene. Scout begins to understand that the gruesome fictions they gleefully told had real-life ramifications on a living person, that the reality of Boo’s life is indeed a troubled one.

Scout notes to Atticus that Boo is like the mockingbird they spoke of, an innocent creature that should be protected. Duvall is able to convey the mockingbird aspect of his character with no lines whatsoever. Through small gestures and the manipulation of his expressions, the sheltered character truly comes to life. It takes a great amount of technique to convey this, and the scene is a fine example of the close-up concentration of film acting.

Duvall’s powerful presence and naturalistic performance truly brings the furtive character to life. Mary Badham finely executes the transformation of Scout’s relationship with Boo. Also, the film’s beautiful score also tenderly portrays the emotions of the scene,  the childlike piano and harp conveying the wonder and simplicity of Scout’s world. The combination of these elements bring together a scene that is one of the finest examples of a book to film adaptation.

Watch the scene below!